Putting their services online should allow governments to serve their citizens much more effectively. But despite heavy spending, progress has been patchy, says Edward Lucas (interviewed here) 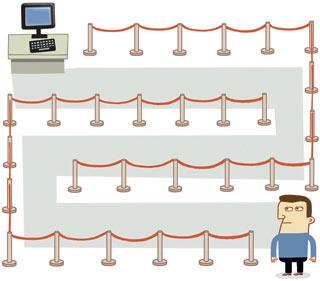 AT 6.15AM on a December morning the streets of central London are cold, dark and offer little for the omnipresent CCTV cameras to record. But outside the Indian High Commission 109 people are sleepily waiting for the visa section to open. David Robb and his friend are first in line, huddled in sleeping bags behind a windbreak since 3am, to ensure visas for a planned holiday in Goa. Nearly all his fellow-sufferers in the queue have booked their air tickets and sometimes their entire holiday on the internet, paying with a credit card. Those electronic signals move information almost at the speed of light—billions of times faster than the shuffling, shivering humans in the visa queue. “In this day and age? Bleeding disgusting,” is Mr Robb’s pithy comment on the Indian visa system.

It is not just that the passport and its owner must be physically present. The £30 ($60) fee must be in cash; the visa form must be filled in by hand and authenticated with a signature and a photograph (a hard copy, not a digital file). The procedure has scarcely changed in 60 years. The 500 people waiting at 8.30am, when the visa office opens, should get their visas by noon, though on busy days stragglers may be told to collect it the next day. Applying by post is possible, but may take weeks.

Compare that with another queue forming in Grosvenor Square, a brisk 20-minute walk across London. Procedures at America’s fortress-like embassy are even more stringent, requiring all visa applicants to present themselves in person, with no postal option. But here the procedure is backed up by intelligent use of electrons. Applications must be submitted online, accompanied by a non-refundable $131, paid electronically. In return, the applicant receives a confirmation e-mail, which includes a barcode with the information from the completed form. Printed out, it is also the entry ticket to the embassy, controlling outsiders’ access to one of the main terrorist targets in London.

Inside, the barcode is scanned, putting the data onto the visa officer’s computer. Fingerprints are digitally recorded. The visa itself, collected shortly afterwards, has banknote-style security features, plus a scanned picture of the applicant.

In some ways the differences are smaller than they seem. Under both systems, absurd questions are asked but the answers are never verified. India wants to know if you have relatives in Pakistan; America wants to know whether you were ever arrested for anything anywhere, and if so, why (your correspondent, detained several times by communist-era secret police, brazenly fibbed).

But in a few nutshells, visa services also illustrate some of the big issues about technology and government. First, processing power and good software can make government more user-friendly and sometimes also more efficient, but technology on its own cannot compensate for the mistakes of bureaucrats and politicians. Second, the state has to balance convenience against effectiveness, the outsider’s time versus the taxpayer’s money and the bureaucrat’s effort. Technology may sharpen these problems or ease them, but it cannot eliminate them altogether.

Believers in technology’s potential in public administration often speak of e-government, or of “transformation”. The practicalities are sometimes vague, but the big picture is clear: government not only puts its services online, but in doing so changes the way it works.

Most countries have got at least somewhere on this, chiefly in what might be called i-government: the provision of information. India’s downloadable visa application form represents that stage. Progress is also being made on using the internet’s potential for interaction. America’s visa system goes some of the way by getting the applicant to key in the data.

The internet is also being used inside government to share data among departments. That is easier to do with non-citizens than with voters, who may be touchy about their privacy being invaded. The next stage will be to provide the whole service online. For visas, that would mean something printed out by the applicant, downloaded onto a smart card or even stored in a mobile phone (an example of “m-government”—same service, different delivery). At the same time, technology should also make it easier for politicians to connect with their voters (“e-democracy”). 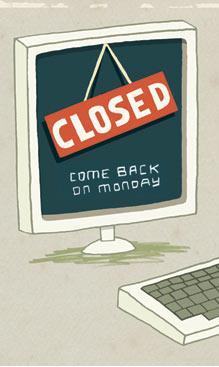 George Markellos of PA Consulting, a British-based consultancy, says that government needs to start by making three big changes. First, it needs to personalise what it offers, rather like online shopping services which record customers’ preferences, making their next visit easier. Second, it has to provide round-the-clock access. People want to deal with government not only in office hours, but also in the evenings and at weekends. And lastly, public services have to be as easy to use as anything the private sector offers. In the online world, government is competing for users’ time and attention with beautifully designed sites that are fun to use. The government’s offering, says Mr Markellos, “has to be massively attractive”.

Yet comparisons with the private sector get you only so far. Government rarely faces competition and public services seldom come at market prices. More often they are “free” or subsidised, and their use needs to be policed or rationed. The state provides its “customers” with defence, justice and roads, and usually some public services such as health care, education, pensions and transport, plus some support for the poor. But it is also the steward of scarce public resources and the preserver of public goods such as law and order. In keeping track of wrongdoers, actual and potential, being user-friendly is not crucial. New technology makes it easier to collect taxes but it does not make them any more welcome.

The state’s role as a watchdog is something that the grumbling queues outside embassies have to bear in mind. Tough visa procedures undoubtedly deter businessmen and tourists from visiting, but the visa is the way that the state protects its citizens from undesirable outsiders. Similarly, issuing passports and driving licences is never going to be as easy as getting a loyalty card from a retailer.

This report will argue that technology can give politicians and officials a better idea of what the public wants and how to provide it, just as it has done in the private sector. But just as the private sector’s adoption of new technology involved a number of pitfalls, some e-government ventures have been ill-starred. Citizens are right to be suspicious about technology that can make government all-encompassing, and they should demand a lot more of government as a monopoly provider of public services.

Technology on its own will not bring reform, but it can make changes easier, cheaper and more effective. The learning curve has not been nearly steep enough, but governments are getting better at buying and using computers and software. The benefits are mounting and the costs are coming down.

The benefits will be biggest in countries where officials and politicians are open to pressure and where the citizens are public-spirited to start with. E-government is no magic bullet, but it gives citizens and lobby groups more power to scrutinise government and highlight waste and dishonesty.

Although hopes have been high and the investment has been huge, so far the results have mostly been disappointing. That reflects a big difficulty in e-government (and in writing about it): it touches on so many other things. What exactly is it that public organisations are trying to maximise, and how can it be measured? Ask the economists. What motivates officials and politicians to make government honest and competent? Bring in the political philosophers. And who decides on the highly contested trade-offs between privacy and security, efficiency and equity?

This report will explain that gloom, fear and optimism are all justified. It will look at the return on investment so far, the hoped-for gains and the neglected drawbacks of e-government. It will show how good leadership, openness and competition can bring spectacular gains, and how bad planning and political interference can make technology in government an expensive disaster. It will look at the dangers of government-run databanks and how to lessen them, and the way in which poor countries such as India may be able to leapfrog rich ones in their use of technology. It concludes by asking if e-democracy makes politics more participatory, or merely noisier. But it starts with an incontestable success: i-government.