Project New Era is a privately led initiative by the Digital Financial Market Infrastructure Consortium (DFMI), evaluating the path towards a retail Central Bank Digital Currency (CBDC) in the UK.

In a recently launched paper the DFMI examine the case for retail CBDCs, details core design considerations, and proposes a roadmap for collective, public-private experimentation.

In the paper, a retail CBDC refers to a digitised form of M01 money, coexisting alongside cash and issued by a central bank as a direct liability for general purpose, domestic circulation.

It also raise the potential for CBDC to form a new monetary category beyond M0 money, including as an on-balance sheet commercial bank liability to mitigate any potential bank disintermediation.

The paper first analyses recent dynamics in the payments industry and the emergence of privately issued digital currencies, determining that market trends and existing payment inefficiencies are creating a platform for change.

E-commerce and new digital payment methods, such as mobile wallets and UPI-based applications, continue to drive the displacement of cash payments (30% contraction globally in 2020 vs 2019), accelerated by COVID-19. 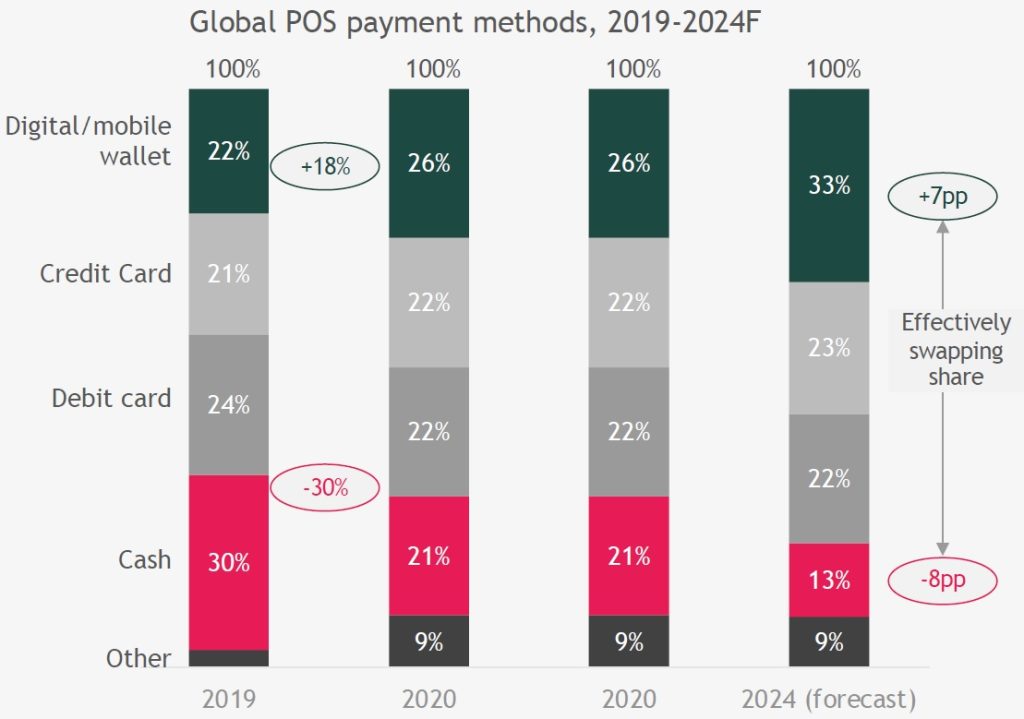 Despite this, some segments in society will continue to prefer the use of cash, and circulation continues to grow across many economies.

In parallel with these changes, the next wave of disruption in payments has also begun, powered by Distributed Ledger Technology (DLT).

DLT offers a new infrastructure for digital money, fulfilling traditional functions and providing new functionality like programmable payments. This could enable further innovation for all players in the market whilst enhancing customer experience.

Stablecoins are digital assets that aim to maintain a fixed value relative to a specified asset, and typically the US Dollar. Stablecoins are beginning to offer some real-world utility, particularly in the Decentralised Finance (De-Fi) industry.

Stablecoin growth exploded in 2021, though this is a small fraction when compared to total global non-cash payment volume. Adoption as a means of payment for traditional goods, services, and assets remains limited.

With growth and early real-world utility, regulators are increasingly concerned by the potential risks posed by unregulated stablecoins on consumers and broader financial stability.

These include issues around collateralisation with risky and/or illiquid assets, and the potential to trigger a ‘run’ where redeemability at par is thrown into doubt or ‘breaks the buck’. Risks also exist around consumer fraud and currency substitution by non-local currency stablecoins operating at a critical mass.

Central banks and regulators across the globe are exploring two paths in response: regulating stablecoins and issuing a sovereign digital currency, CBDC.

A retail CBDC is a digital asset issued by a central bank for general purpose, domestic circulation. As a central bank liability, a CBDC could be free of credit and liquidity risks.

Unlike a wholesale CBDC, it would be made available to the general population. A CBDC can generally take two forms:

The distribution of CBDC in live implementations and pilots (including The Bahamas, Nigeria, and China, with an Indian pilot due later in 2022) is through a ‘two-tier’, indirect approach.

A two-tier model distributes CBDC to citizens through commercial banks and non-banks in an open market model. The central bank oversees management of the central ledger, including net settlement.

Commercial banks and non-banks are responsible for wallet issuing and the provision of financial services.

Drivers for CBDC adoption vary by country, but the primary benefits are similar. These include near-instant settlement, potential for reduced transaction costs (both particularly material for merchants receiving consumer payments), fraud reduction, and programmable payments.

Programmable payments – a new breed of automated payment – is distinctive in enabling new forms of self-executing payments based on programmed code and external triggers for complex, conditional payment propositions.

Secondary benefits such as financial inclusion vary by country, while effectiveness for monetary policy implementation and countering the threat of stablecoins is yet to be established.

CBDCs are unlikely to displace stablecoins as a bridge for cryptocurrency traders in the short-term, given the need for direct integration with public blockchains like Ethereum. Due to compliance, cybersecurity and other regulatory concerns, this is an unrealistic outcome.

However, CBDCs over the long-term could provide a regulated alternative in a future digital currency ecosystem. Superior end-user adoption over stablecoins, driven through enhanced value propositions like convenience and safety, may limit the materiality of stablecoin risks to financial stability.

Adoption of CBDCs is likely to take time

Current sentiment is that the first CBDCs in developed markets like Sweden will arrive between 2022 and 2023, with more to follow in subsequent years.

A synthetic CBDC offers an alternative route to market, with functional equivalence to a conventional CBDC in terms of economic and societal benefits. However, many of the same risks exist with synthetic CBDCs, and new challenges are introduced.

Central bank CBDC research and broader topic interest is intensifying. ~90% of central banks surveyed by the Bank for International Settlements (BIS) are actively researching CBDCs, with a focus on retail applications.

The Reserve Bank of India has also announced the trialling of a Digital Rupee in 2022. In the most prominent initiatives, central banks are typically supported by private sector players.

Early adopters are realising benefits by proactively shaping the role of digital money in their economies, guiding design and implementation choices to enable innovation in their markets.

However, in many developed economies, considerable ambiguity remains regarding the direction of central bank plans for digital currencies. The current discourse is dominated by debates focused on issues rather than collaborative initiatives looking for constructive solutions.