Feature: Time for Brazil to get Real?

With a young, dynamic population and a growing economy, Brazil is a hot market for global payments players. But will endemic fraud problems and technical challenges blunt its attraction?

There’s a long-standing joke among business and government types that Brazil has been the country of the future for the last sixty years.

Persistent problems with corruption – which cost Brazil $41 billion as recently as 2014 – and the challenge of developing infrastructure across a vast and relatively undeveloped country have plagued the nation of 220 million people. 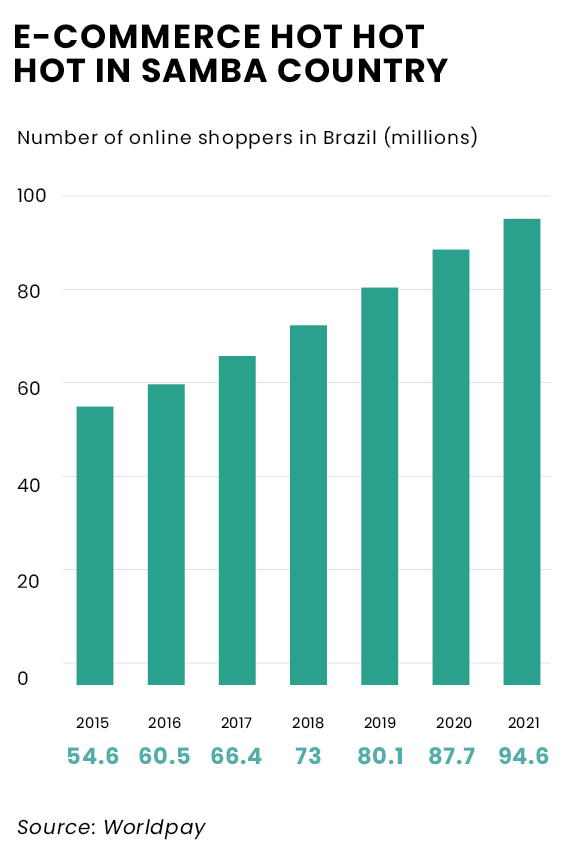 After a long period of recession and stagnation, Brazil has established itself as one of the world’s consistently fast-growing economies, with aggregate growth topping seven percent in the last three years compared to stagnation in many other developing and developed markets.

From cash to card to digital

In payments terms, Brazil’s transformation has been no less dramatic than its overall economic renaissance.

Cash use has dropped from around 60 percent in 2012 to just over 40 percent this year, while in the online environment, cash equivalents such as cash-on-delivery or invoices paid with cash now account for less than a third of payments, according to ebanx.

A 2022 study from Worldpay claims just under half of all Brazilians, or some 94 million people, shopped online in 2021 – an astonishing figure in a country where less than half the population has a bank account and internet penetration hovers at around two-thirds.

Brazil is by some distance the largest e-commerce market in Latin America, posting revenues of more than $12.5 billion in 2021, up 18 percent over a year and one of the fastest growth rates among major economies.

Roughly as many Brazilians access the internet through their phones, at seventy percent, as have a home internet connection – though those with options prefer to shop using their phones.

So far, a familiar picture is emerging to those well-versed in emerging markets. Brazil is leapfrogging antiquated banking infrastructures and moving straight to instant mobile payments, enabled by innovators such as Pix, Bolero and AstroPay.

Also familiar is the switch from cash straight to digital – though cards remain widely used, and popular.

“Brazil’s growth is remarkable, but fraud is prolific.”

However, if Brazil’s performance in developing its digital economy is remarkable, then no less remarkable is the country’s catastrophic record when it comes to fraud. 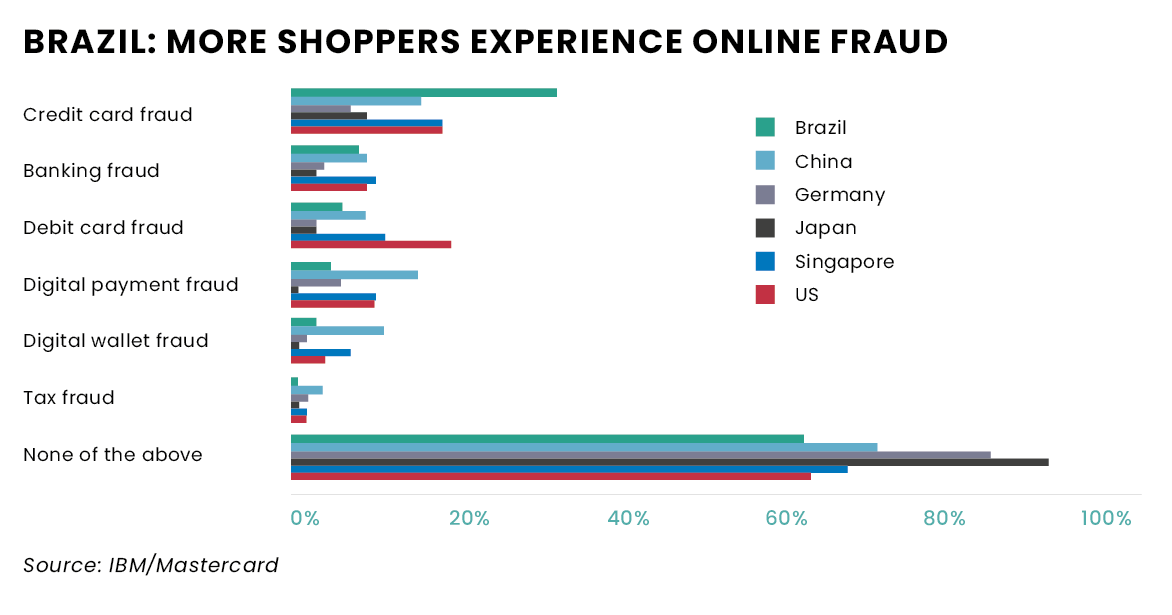 Simply put, Brazil has one of the worst records in the world when it comes to credit card fraud.

The problem is so acute that in August this year, Brazil’s Central Bank announced it would investigate 23 banks in the country for issuing unsolicited credit cards; according to IBM, one in three Brazilians has been the victim of credit card fraud, almost double the figure of the next highest market (China), while three times as many people have had their cards frozen for suspected fraud, and dispute resolution times are the highest in the world.

“Dispute resolution times in Brazil are the highest in the world.”

As a result of this catastrophic record, consumers are flocking to merchants and payment systems that make fraud detection and prevention a priority.

It’s not a coincidence that one of the world’s pathfinding card fraud detection companies, Feedzai, originated in Brazil.

Such a heady brew of rapid transformation and criminality has led to the development of solutions designed to meet the specific challenges of the Brazilian market.

First to market was Boleto, a form of voucher payment system set up by the Central Bank of Brazil in partnership with the country’s retail banks.

When transacting, customers receive a voucher, or “boleto”, stating the amount required to pay. Customers then pay their boleto before its expiration date at authorized agencies or banks, ATMs, or online bank portals.

Payment confirmation is received by merchants the next business day, with funds available two days after confirmation.

Transactions are typically settled using cash – a fact that protects consumers against card fraud, even in online environments, where 52 percent of Brazilians use “boletos” of some description to settle their digital accounts.

Launched as a digital accompaniment to Boleto by the Brazilian Central Bank in November 2020, Pix is an internet browser-based scheme that enables its users — people, companies and government departments — to send or receive payment transfers in just a few seconds, 24/7/365. 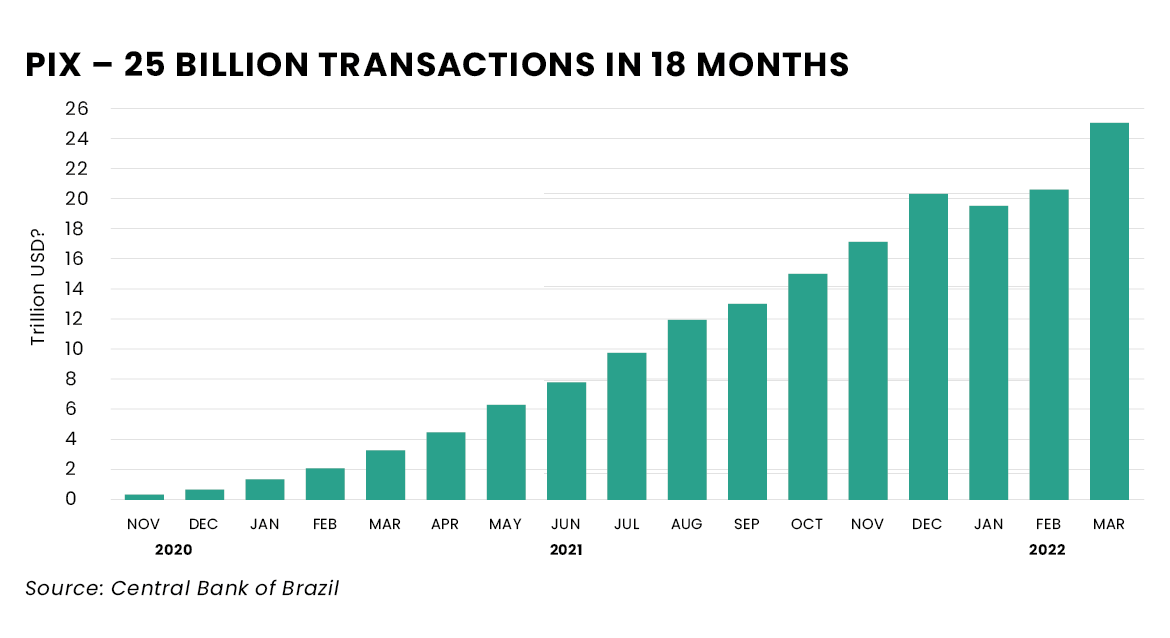 As an account-to-account scheme, Pix reduces the cost of accepting digital payments by cutting intermediaries such as PSPs and payment schemes out of the value chain. The Central Bank say they introduced Pix to reduce acceptance costs for merchants, improve transaction security and competition, and promote financial inclusion.

Whatever the reasons behind the scheme, it’s been a roaring success. Since launch, the number of transactions using Pix has grown more than six-fold, racking up more than 25 billion transactions in just eighteen months.

Like Boleto, Pix seeks to solve the problem of financial inclusion in a country where almost one in three citizens does not have a bank account.

Similarly, online payment service AstroPay enables users to purchase online on international sites in a bid to assist those whose credit histories or lack of a bank account prevented them from accessing international credit cards for payment.

Founded in 2006, Astropay can access more than 200 payment methods – including everthing from Boleto to Google Pay – to help users pay for their online purchases with local payment methods and in Brazilian Reals. At present the company has more than six million users across Latin America, with plans to expand into Europe.

A mountain still to climb

For all that the Central Bank, retail banks and, indeed, consumers themselves should be applauded for the inventive ways in which Brazil has sought to overcome the problems of rapid market development and a large unbanked population with little internet access.

Praise duly delivered, there remain significant problems in Brazil’s payment system, most obviously in the very high levels of fraud being experienced.

It’s important to note the efforts made by all parties – in particular banks and payment service providers – to combat fraud in Brazil, including AI-based transaction analysis and elevated authentication arrangements such as EMV’s 3DS 2.

As the Brazilian market continues to develop, it’s clear that some form of comprehensive digital ID solution is going to be needed if anti-fraud measures are going to have any real effect.

The problem is so acute that wholesale exclusion from certain financial services – for instance, international credit cards – still exists. In needing more and better online Know-Your-Customer schemes and improved fraud detection, Brazil shares at least some of the characteristics of a modern, developed payment market – albeit one marked by growth which, at times, feels so fast as to be barely controlled.