Since Merchant Machine’s analysis of the countries most reliant on cash in 2021, countries around the world have seen further changes in their payment methods.

In light of this, the research has been updated for this year to discover which countries are the most reliant on cash in 2022. 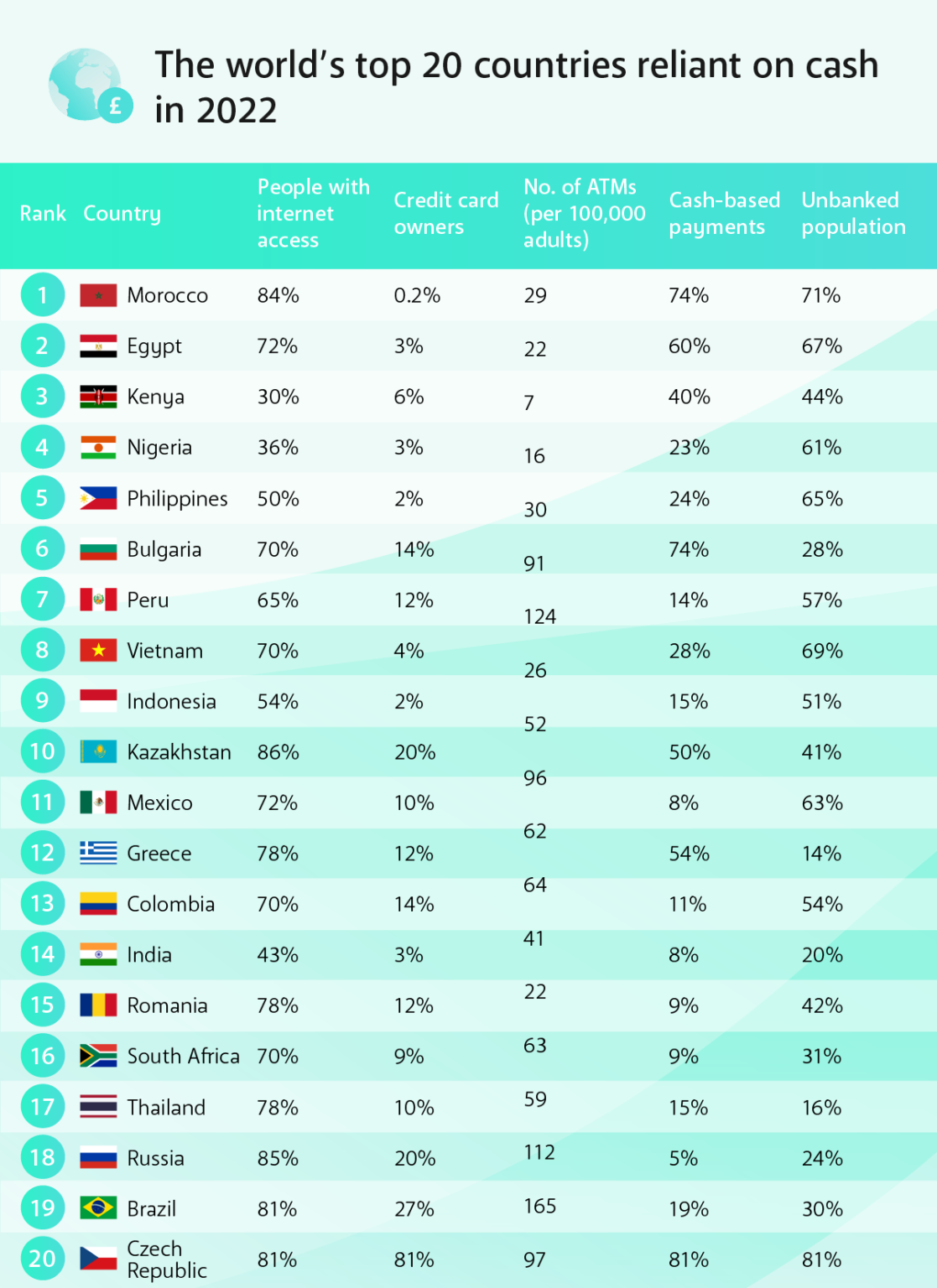 According to the research, Morocco is leading the way when it comes to cash payments in 2022. 74% of all payments in Morocco are cash-based, with 71% of the population not having their own bank account and only 0.2% owning a credit card, indicating that the majority of Moroccan citizens are still relying on physical cash for their transactions.

Interestingly, 84% of the Moroccan population have access to the internet, so this preference for cash is likely not due to any internet issues.

Number four also goes to an African country, Nigeria, whose population has low internet access (36%) and credit card use (3%). The Philippines comes fifth, with the highest number of ATMs out of all the top five countries – 30 per 100,000 adults. A higher number of available ATMs indicates more cash withdrawals, which in turn points to greater cash use.

Europe’s most cash-reliant countries in 2022

Following on from the world’s most reliant countries, the research also focused on European countries to find out which countries in Europe are using the most cash in 2022.

The research reveals that Bulgaria is the most reliant country in Europe with a cash reliant score of 8.35 out of 10 on the index. Bulgaria has the lowest percentage of people with access to the internet out of the countries studied (70%), meaning digital payments are off bounds for many. 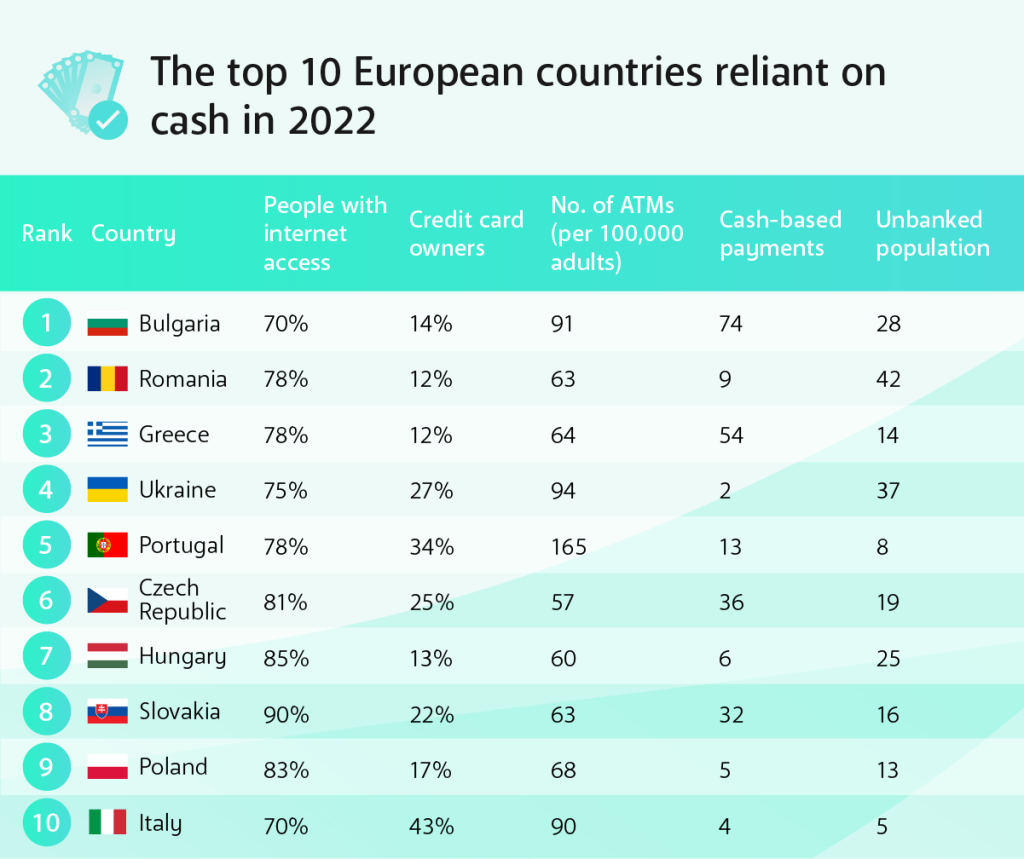 As a result, 74% of all payments are cash-based in the country and there are 91 ATMs per 100,000 adults. 28% of Bulgaria’s population are also unbanked, which is the third highest out of the countries studied showing high dependency on cash amongst the population.

Romania comes in second after Bulgaria. Although only 9% of payments are cash-based in this Eastern European country, it has the highest percentage of unbanked population out of all other European countries at 42%, as well as just 12% of citizens owning a credit card.

Greece follows in third, with over half (54%) of all payments here being made in cash.

The countries closest to a cashless society

Here is the list of the 10 countries who are closest to a completely cashless society, with Norway taking the number one spot. Cash accounts for only 2% of all payments in Norway and 100% of its population own a bank account, with 71% also owning a credit card.

The close-by country of Finland follows Norway, with the same small percentage of cash-based payments (2%) and none of its citizens going without a bank account.

On the other side of the globe New Zealand is also waving goodbye to cash, coming in third with the same percentage of cash-based payments (2%) but a very slightly higher unbanked population of 1%. 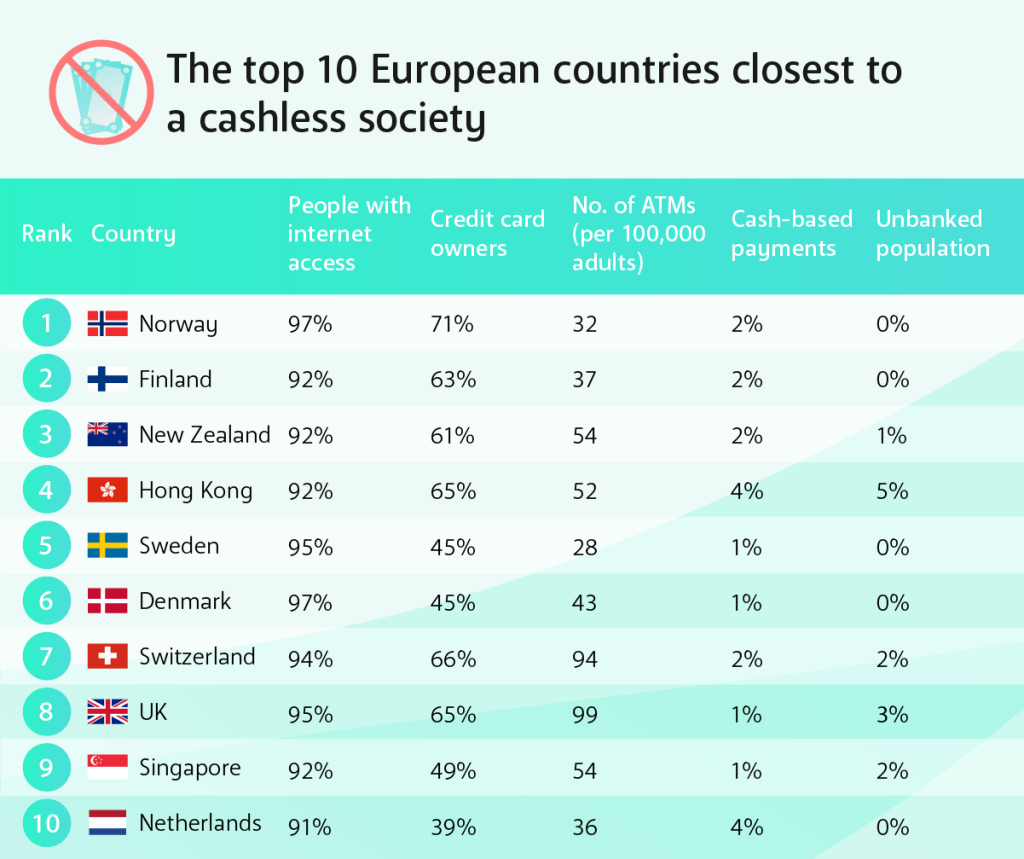 The UK ranks lower at number 8 due to a slightly smaller percentage of credit card users (65%) and higher percentage of unbanked population (3%). However, it actually sees less cash-based payments overall, with just 1% of all payments being made with notes and coins.

The most popular digital wallets in the world in 2022

Digital wallets are contributing to the decrease in cash-use, allowing users to make cashless payments via a portable device such as a mobile phone or smartwatch.

However, where Paypal previously ranked as the fourth most popular mobile payment platform in 2021, it has since dropped to fifth and been replaced by Google Pay.

Google Pay now has 421 million active users, which is over 40 million more than Paypal’s 377 million. 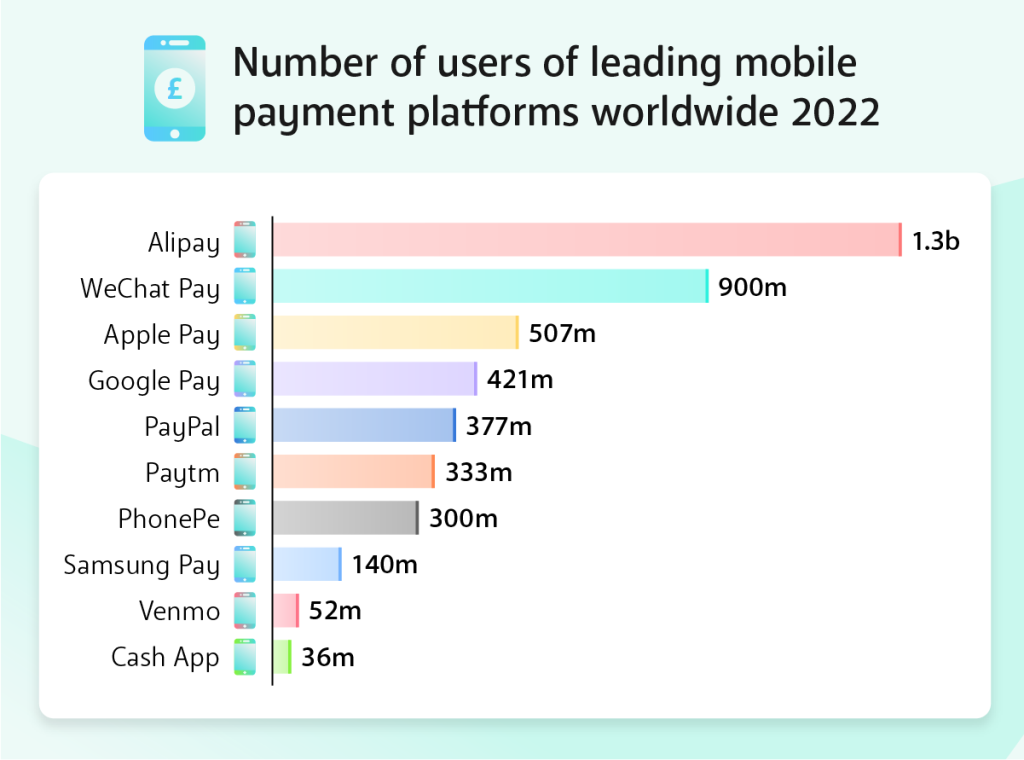