Remittances sent worldwide have increased 64.3% in the past decade, rising from $420.1 billion 10 years ago to $653.4 billion in the last year*, according to research by ACE Money Transfer.

The research notes the boom in remittances coincides with the recovery from the global financial crisis in 2011-12, adding that the rise highlights the increasingly important role that remittances from expat workers play in supporting developing economies. 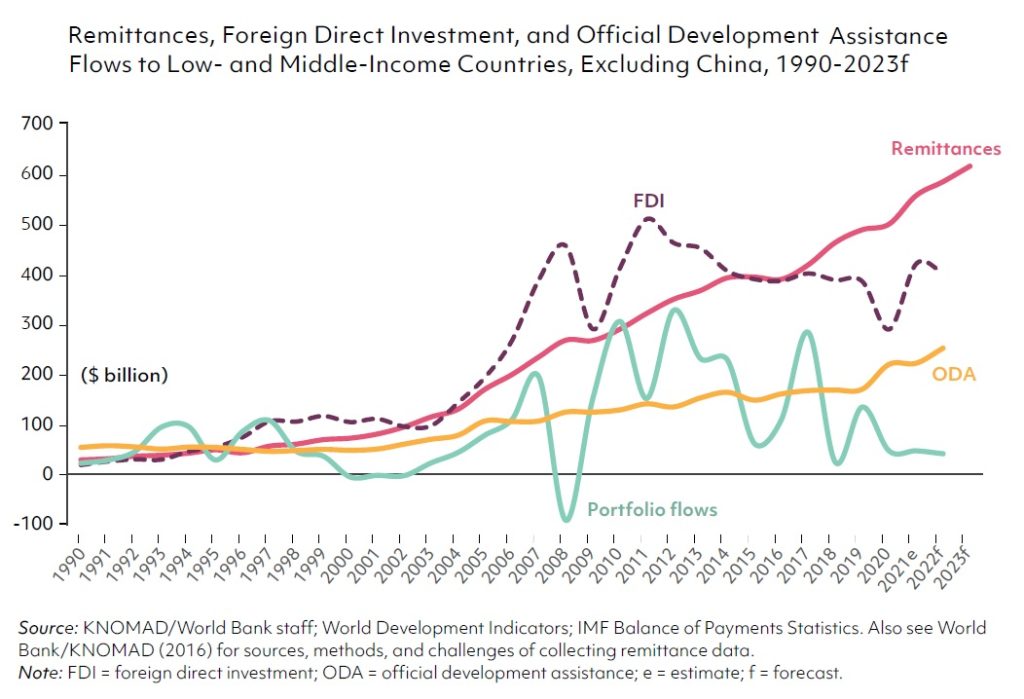 This is particularly the case in periods of global economic stress such as the current macroeconomic situation.

Sri Lanka in particular has struggled following the pandemic, with its economy having collapsed. The country has been short of cash to pay for vital food and fuel imports and has defaulted on its debt.

Remittances are a key pillar of Sri Lanka’s economy, reaching $7.1 billion in the past year, up from $6.7 billion the previous year. Remittances in Sri Lanka support economic growth, reduce the burden on social security payments and help alleviate poverty. Increases in remittances could significantly aid Sri Lanka’s economic recovery.

Nepal has also struggled due to the pandemic, with its economy has been crippled by a widening trade deficit and skyrocketing inflation. Remittances to Nepal, which stood at $8.1 billion last year, down from $8.2 billion the previous year, make up around 50% of the country’s foreign currency reserves.

Pakistan and Nigeria are two other countries facing economic difficulties where remittances can play a key role in their recoveries. Both countries have been struggling with the effects of surging inflation this year.

Pakistan’s currency has devalued 28% compared to the US dollar so far this year, fuelling surges in the prices of vital imported goods such as fuel, cooking oil and grains.

This has made remittances to Pakistan, which have risen 26% to a record $33 billion in the past year, even more important. Remittances are a key source of foreign currency for Pakistan and play a significant role in supporting its currency. This is in turn can help control inflation and the price of essential goods and services in the country.

Nigeria’s economy has also been struggling due to inflation, which increased by 18.6% in June compared to the year before. Remittances to Nigeria, which stood at $17.2 billion in the past year, are widely seen as key to helping Nigeria’s economic recovery post-pandemic.

President Muhammadu Buhari has urged Nigerians in the diaspora to actively participate in the country’s recovery by sending money home.

The role of remittances in strengthening resilient economies

Remittances can also play an important role in countries where the economy has remained resilient. This includes the Philippines’ economy, which has continued to show rapid expansion this year despite global headwinds.

An important stabilising factor in its economy has been remittances, which have reached a record high of $34.9 billion in the past year. Remittances in the Philippines are important in supporting domestic consumer spending, which has driven the country’s economic growth.

Remittances are a crucial source of foreign capital for many developing countries. Unlike other flows of private capital, remittances have remained resilient throughout the pandemic. As economics across the world continue to recover, remittances continue to play a vital role in helping countries build resilience and drive economic growth.

“Remittances have a massive impact on people’s lives across the world. When times are tough and economies are struggling, this is when remittances are particularly important,” says Rashid Ashraf, CEO of ACE Money Transfer.

“Around three quarters of remittances sent globally are used to cover essential things, like putting food on the family’s table and covering medical expenses, school fees or housing expenses. In addition, in times of crises, migrant workers tend to send more money home to cover loss of crops or family emergencies.”

Remittance flows to the East Asia and Pacific region fell 3.3% following a 7.3% drop in 2020. Flows reached $133 billion in 2021, close to 2017 levels. Excluding China, remittances to the region grew by 2.5% in 2021. Remittances to the Phillipines benefitted from job creation and wage gains in the United States where a large number of Filipino migrants live. Among economies where remittance inflows constitute a high percentage of their GDP are Tonga, Samoa, the Marshall Islands, the Philippines, and Fiji. Excluding China, remittance inflows are projected to grow by 3.8% in 2022. The average cost of sending $200 to the region fell to 5.9% in the fourth quarter of 2021 compared to 6.9% a year earlier.

Remittance inflows to Europe and Central Asia increased by 7.8% in 2021, reaching historic highs of $74 billion. The growth was due in large part to stronger economic activity in the European Union and rebounding energy prices. In 2021, Ukraine received inflows of $18.2 billion, driven by receipts from Poland, the largest destination country for Ukrainian migrant workers. Personal transfers constitute a vital source of finance and growth for the economies of Central Asia, for which Russia is the prime source. As a share of GDP, remittance receipts in Tajikistan and the Kyrgyz Republic were 34% and 33% respectively in 2021.

Near-term projections for remittances to the region, which are expected to fall by 1.6% in 2022, are highly uncertain, dependent on the scale of the war in Ukraine and the sanctions on outbound payments from Russia. By contrast, remittance flows to Ukraine are expected to increase by over 20% in 2022. The average cost of sending $200 to the region fell to 6.1% in the fourth quarter of 2021 from 6.4% a year earlier.

Remittance flows to Latin America and the Caribbean surged to $131 billion in 2021, up 25.3% from 2020 due to the strong job recovery for foreign-born workers in the United States. Countries registering double-digit growth rates included Guatemala (35%), Ecuador (31%) Honduras (29%), Mexico (25%), El Salvador (26%), Dominican Republic (26%), Colombia (24%), Haiti (21%), and Nicaragua (16%). Recorded flows to Mexico include funds received by transit migrants from Honduras, El Salvador, Guatemala, Haiti, Venezuela, Cuba, and others.

Remittances are important as a source of hard currency for several countries for which these flows represent at least 20% of GDP, including El Salvador, Honduras, Jamaica, and Haiti. In 2022, remittances are estimated to grow by 9.1%, though downside risks remain. The average cost of sending $200 to the region was mostly unchanged at 5.6% in the fourth quarter of 2021 compared to a year earlier.

Remittances to the developing countries of the Middle East and North Africa region grew by 7.6% in 2021 to $61 billion, driven by robust gains into Morocco (40%) and Egypt (6.4%). Factors supporting the flows were economic growth in host countries in the European Union as well as transit migration which further boosted inflows to temporary host countries such as Egypt, Morocco, and Tunisia. In 2022, remittance flows will likely ease to a 6% gain.

Remittances have long made up the largest source of external resource flows for developing MENA—among ODA, FDI, and portfolio equity and debt flows—accounting for 61% of total inflows in 2021. The cost of sending $200 to MENA fell to 6.4% in the fourth quarter of 2021 from 6.6% a year ago.

Remittances to South Asia grew 6.9% to $157 billion in 2021. Though large numbers of South Asian migrants returned to home countries as the pandemic broke out in early 2020, the availability of vaccines and opening of Gulf Cooperation Council economies enabled a gradual return to host countries in 2021, supporting larger remittance flows. Better economic performance in the United States was also a major contributor to the growth in 2021.

Remittance flows to India and Pakistan grew by 8% and 20%, respectively. In 2022, growth in remittance inflows is expected to slow to 4.4%. Remittances are the dominant source of foreign exchange for the region, with receipts more than three times the level of FDI in 2021. South Asia has the lowest average remittance cost of any world region at 4.3%, though this is still higher than the SDG target of 3%.

Remittance inflows to Sub-Saharan Africa soared 14.1% to $49 billion in 2021 following an 8.1% decline in the prior year. Growth in remittances was supported by strong economic activity in Europe and the United States. Recorded inflows to Nigeria, the largest recipient country in the region, gained 11.2%, in part due to policies intended to channel inflows through the banking system. Countries registering double-digit growth rates include Cabo Verde (23.3%), Gambia (31%), and Kenya (20.1%). Countries where the value of remittance inflows as a share of GDP is significant include the Gambia (27%), Lesotho (23%), Comoros (19%), and Cabo Verde (16%).

In 2022, remittance inflows are projected to grow by 7.1% driven by continued shift to the use of official channels in Nigeria and higher food prices – migrants will likely send more money to home countries that are now suffering extraordinary increases in prices of staples. The cost of sending $200 to the region averaged 7.8% in the fourth quarter of 2021, a small decline from 8.2% a year ago.